While on tour, we facilitate opportunities for communities to engage in dialogue on art and culture, and we offer lively Get on Your Feet workshops for children, youth and adults in dance, music, theatre and Indigenous culture. 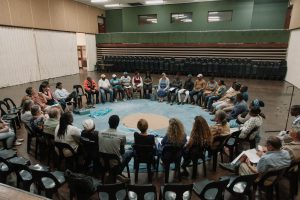 Empatheatre: A Workshop on Empathy and Social Justice Theatre Practices in South Africa

Empatheatre is a responsive, action-led research and theatre-making process which capitalizes on the potential of the “live” theatre experience to unpack the inner-workings of social rupture. In collaboration with various stakeholders ranging from activists, performing artists, policy makers and academics, the Empatheatre team sets out to forge innovative creative responses to complex social issues.

Join South African theatre-maker Neil Coppen for this 2-hour interactive workshop examining the history and impacts of South African social-justice theatre movements. Using a variety of illuminating case studies from Empatheatre’s more recent body of work, Neil will explore the challenges that arise with theatricalizing research and shaping effective storytelling advocacy strategies. The presentation will be followed by an open discussion and question and answer session.

Neil Coppen is a South African theatre-maker and activist who has won several awards for his playwriting, design and direction work including the Standard Bank Young Artist Award for Drama 2011 and the 2019 Olive Schreiner prize for Drama.

To reserve a spot, RSVP to Leila Darragh at production@redskyperformance.com

The Mayor's Evening for the Arts

Red Sky Artistic Director Sandra Laronde was invited to join the honourable Mayor John Tory’ head table at the Mayor’s Evening for the Arts at the Metro Toronto Convention Centre. The event raised $1.48 million dollars for Arts in the Parks and the Creative City Initiatives of the Toronto Arts Foundation.

Getting On Your Feet

Getting on Your Feet workshop facilitated by Associate Artist Eddie Elliott with Grade 4 children from Leo Nickerson Public School in St. Albert, Alberta. Twenty-four children and three teachers learned about traditional culture, movement games, and voice in a fun and inspiring workshop.

Getting On Your Feet

Red Sky Associate Artist Jera Wolfe participated in Fall for Dance North’s “What is Indigenous Dance?” Panel Discussion on October 3, 2019 at Ryerson Theatre in Toronto, ON. The event was moderated by Michael Greyeyes (Artistic Director, Signal Theatre) and included an international mix of artists.

Red Sky Performance was honoured to be part of the "Honouring of Truth and Reconciliation" event at the Canadian Museum of History in Gatineau, QC commemorating the thousands of children who did not make it home from residential schools. We led the procession of the ceremonial cloth bearing the names of over 2,800 children. This special event was broadcasted by APTN on September 30, 2019.

Red Sky Artistic Director Sandra Laronde and General Manager Kathy Morrison attended a reception in honour of the Visit of a Sydney Delegation of Indigenous Place-Making in Urban Centres, hosted by Her Honour Lieutenant Governor Elizabeth Dowdeswell at Queen's Park.

Getting On Your Feet: Haka, Movement, and Storytelling

Re-Shaping How We Understand the Impact of Arts

Red Sky’s Artistic Director Sandra Laronde and General Manager Kathy Morrison participated in Re-Shaping How We Understand the Impact of Arts at the Globe and Mail Centre in Toronto, ON which focused on the outcomes of the AHRC Cultural Value Project followed by an illuminating arts panel discussion and round table talks among Toronto’s arts community.

Artistic Director Sandra Laronde had the honor to be invited to the John F. Kennedy Centre for Performing Arts in Washington D.C. for the REACH Opening festival for First Nations Cultures. This year’s festival focused on celebrating First Nations cultures: The People We Are with special guest speaker Yalitza Aparicio Martínez, Academy Award-nominated actress for her debut role in Alfonso Cuarón's 2018 film Roma.

The Grand Theatre, Kingston, ON

Journey across the multiverse with TRACE, a sumptuous new dance and live music creation exploring Anishinaabe sky and star stories at 8 pm, followed by a REDTALK: ISHPIMING: The Above World with Melanie Goodchild at 9 pm. This unique REDTalk featured Melanie Goodchild who spoke to the shifting colonial narratives and about the world above while introducing Anishinaabe cosmology and star knowledge.

Red Sky’s Adizokan suite was performed at the Toronto Symphony Orchestra’s School Series to students from all over the Greater Toronto Area. Students had an opportunity to speak with artists, including soloist throat-boxer Nelson Tagoona, who led an interactive audience participation exercise.

Wrapping up an extensive tour of Northern Ontario, the cast of Mistatim spent 2 days with students at English Catholic Central School in New Liskeard, ON giving them the opportunity to work up close and personal with professional performers in learning basic voice and body warm-ups, confidence building, theatre games, and movement.

The cast of Mistatim crossed the provincial border to arrive at Kiwetin School, giving them the opportunity to work up close and personal with professional performers in learning basic voice and body warm-ups, confidence building, theatre games, and movement.

Continuing to tour through Northern Ontario, the cast of Mistatim spent an afternoon with the students of the Laura McKenzie Learning Centre on Bear Island, giving them the opportunity to work up close and personal with professional performers in learning basic voice and body warm-ups, confidence building, theatre games, and movement.

While on tour in Northern Ontario, the cast of Mistatim spent an afternoon with the students of St Basil’s Elementary School, giving them the opportunity to work up close and personal with professional performers in learning basic voice and body warm-ups, confidence building, theatre games, and movement.

Legendary dancer and storyteller, Jock Soto, in conversation with Red Sky Artistic Director Sandra Laronde to discuss his life as a dancer and teacher.

An evening of conversation and learning about Truth and Reconciliation in Canada with Victoria Grant as moderator, and Special Guests Sandra Laronde, Amos Key Jr and David MacDonald.

David MacDonald grew up in Prince Edward Island. He is a graduate of Prince of Wales College in Charlottetown, Prince Edward Island, Dalhousie University and Pine Hill Divinity Hall in Halifax, Nova Scotia. Ordained as a United Church minister in 1961, he served as pastor in Alberton, PEI from 1962 to 1965. He is a former Member of Parliament and has served in Cabinet as Secretary of State, Minister of Communications, and Minster Responsible for the Status of Woman. He believes that a process of real reconciliation will require dealing directly with the major issues that have caused a rupture in the relationship between Aboriginal and non-Aboriginal peoples.

Amos Key Jr. is a Mohawk from Six Nations of Grand River, born into the Turtle Clan of his Mother. He is an educator and staunch advocate for First Peoples Linguistic and Human Rights and Social Justice. Amos is Founder, Trustee and Chair of the new Gai hon nya ni: The Amos Key Jr E-Learning Institute and Centres of Excellence, a provincial cutting edge ‘synchronous’ E-learning private secondary school where ‘Original Youth’ can achieve their Ontario Secondary School Diploma on line, in real time, with real teachers. Gai hon nya ni: is commited to offering 4 First Nations Language Credits. Amos has been with the Woodland Cultural Centre, in Brantford, celebrating 29 years as the First Nations Languages Director, dedicating his life to supporting and stabilizing Aboriginal/First Nations languages and civilizations. He cannot wait to retire…so he can concentrate of writing and lecturing about his people and in challenging the status quo…so as to crush the glass and class ceiling.

Victoria Grant ICD.d is from the Loon Clan, Teme-Augama Anishnabai Qway, Traditional Territory is the Temagami area in Northern Ontario.
She is a member of the Temagami First Nation, a status given to her through Canada’s Indian Act.
Them most important roles in her life are a Wife, Mother and Grandmother.
Throughout her career, always with a passionate voice, in her work and in her volunteer activities has always been and continue to be an advocate for more robust Indigenous engagement.
She has served on Foundation board of directors, locally, provincially and nationally. She was co-founder and inaugural chair of the Temagami Community Foundation. Currently, she is a Past Chair of Community Foundations of Canada, Past Chair of The Circle on Philanthropy and Aboriginal Peoples in Canada, director with The Counselling Foundation of Canada, and a member of the Advisory Committee of the Governor General’s for the Sovereign’s Medal for Volunteerism.

Red Sky presented an Open Dance Class with Jock Soto. Members of the public were invited to warm-up with Red Sky’s dancers, and participate in an exclusive class with the former principal dancer of the New York City Ballet, Jock Soto.

Facilitated by Red Sky Associate Artist Eddie Elliott, he delivered of a workshop based in both contemporary movement and traditional Maori dance forms/storytelling methodologies.

The cast of Mistatim spent 2 days with the students of Mississauga Secondary School, giving them the opportunity to work up close and personal with professional performers in learning basic voice and body warm-ups, confidence building, theatre games, and movement.

Bea shared her experiences as an ex-student of the St. Joseph Residential School in Spanish, Ontario, contributing to creating a legacy of fortitude, hope, and resilience with First Nations and Canada.

Sandra Laronde, Executive & Artistic Director of Red Sky Performance was invited by The Honourable Mélanie Joly, Minister of Canadian Heritage to join the very first Canadian Creative Industries Trade Mission to China in April 2018. On this exciting trade mission, delegates sought to establish greater commercial ties and export opportunities for Canadian companies across all sectors. Led by Minister Joly, this mission began constructive exchanges that and to see how Canadian Heritage can support Canada’s creative industries expansion in the Chinese market.

Sandra Laronde in conversation with Tanya Tagaq and Laakkuluuk Williamson Bathory look at the artists’ work through a lens of their Indigeneity, spanning Inuit culture from Canada to Greenland.

Red Sky has a strong track record of creating experiences that connect art to nature. Miigis is a shining example of conservation, health, valuing water, culture, science, and the nature of connection.

For almost two decades, Red Sky embodies a deep conservation ethic that is embedded in our programming. We have collaborated with leading Indigenous artists from First Nations, Inuit and Metis communities within Ontario and from Indigenous communities from overseas. The process of exchange has built a platform for sharing Indigenous perspectives of the Indigenous Peoples of Turtle Island, and our intrinsic understanding of contemporary challenges, and traditional practices of land and water conservation.

Miigis was co-commisioned by the City of Toronto, The Bentway and Fort York Historic Site in September 2017.

Her Excellency the Right Honourable Julie Payette, Governor General of Canada, presented a Meritorious Service Decoration to Executive & Artistic Director Sandra Laronde on Tuesday, February 20, 2018 during a ceremony at Fairmount Royal York Hotel. This is an honour that only 1300 people have received to date, and it’s bestowed upon people for “remarkable contributions” and being a positive inspiration to Canadians.

The cast of Mistatim answered questions with the help of interpreters from audience members after two performances at the China Luoho International Youth Drama Festival.

Facilitated by Red Sky Associate Artist Eddie Elliott, he delivered of a workshop based in both contemporary movement and traditional Maori dance forms/storytelling methodologies.

Sandra Laronde was the invited speaker for a pre-show chat in the lobby of the Spatz Theatre.

Facilitated by Red Sky Associate Artist Eddie Elliott, this young Maori performer was both energizing and refreshing in his delivery of a workshop based in traditional Maori dance forms and traditional storytelling methodologies for Citadel High School students.

Sandra Laronde led a round-table discussion attended by members of the local indigenous community, as well as professors and students, and members from the Halifax artistic community.

Q&A with Sandra Laronde and dancers following the performance of Backbone.

Q&A with Sandra Laronde and dancers following the performance of Backbone.

Sandra Laronde was the invited speaker for a pre-show chat in the lobby of the Berkeley Street Theatre.