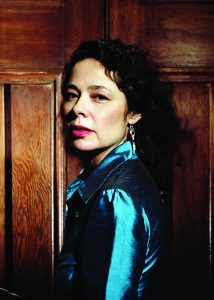 A highly accomplished arts leader, creator, innovator, and influential speaker, Sandra Laronde (Misko Kizhigoo Migizii Kwe) which means “Red Sky Eagle Woman” in Anishinaabemowin (Ojibway) language, M.S.C., O.M.C., OOnt, B.A. (Hon), Hon. LL.D. has over three decades of experience in arts and culture. She is from the Teme-Augama-Anishinaabe (People of the Deep Water) in Temagami, northern Ontario and is based in Toronto.

Sandra plays a pivotal role in the ongoing Indigenous cultural resurgence in Canada. She has created an extraordinary body of work with collaborators that has led to powerful arts experiences elevating the ecology of arts and culture in this country while strengthening an international presence.

A champion of Canada, Sandra is active in cultural diplomacy through the arts, forging stronger ties by representing the nation at numerous high-profile international events and platforms including the Venice Biennale, two Cultural Olympiads (Canada and Beijing), Canadian Heritage’s first Creative Industries Trade Mission to China, a Trade Mission to Europe, Global Affairs Canada visit to northern Sweden, Canada’s High Commission, Australia Council for the Arts, Arts Council of Mongolia, and as an Official Delegate and Speaker at the 19th ASSITEJ World Congress in Soweto, South Africa, to name a few. Sandra founded Red Sky Performance in 2000, Canada's leading company of contemporary Indigenous performance in Canada and worldwide.

Currently, Sandra serves on the inaugural Board of TO Live Foundation, Telus GTA Community Foundation, and is on the Steering Committee of the CSC Global Leaders 2023 which helps to build leadership capacity across the Commonwealth.

She served as a mentor for the Advancing Indigenous Performance Program, a new program to deepen support for US-based Indigenous performing artists and touring networking that is rooted in the shared values of openness, inclusion, equity and generosity.