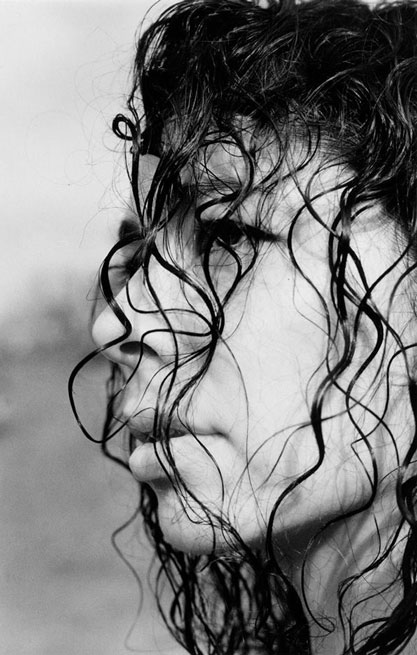 Sandra Laronde is a force of nature to be reckoned with on the Canadian cultural scene. She is a dancer, actress, writer, director, artistic director, producer, facilitator, and cultural and social activist. More importantly, she is member of the First Nations, and her personal mandate is to bring traditional Aboriginal elements into contemporary dance and theatre while appealing to a multicultural, intergenerational audience. Truth be told, the always-in-motion Laronde "dances" her way between several careers.

She is artistic director of Red Sky, which mounts productions such as Dancing Americas (2003), a contemporary dance work inspired by the migration of the Monarch butterfly between Canada and Mexico. Laronde also produces Red Sky at Night, a cabaret that presents an array of Aboriginal performing artists.

Laronde was born in Temagami, about 700 kilometres northeast of Toronto. She is an Ojibwa of the Teme-Augama Anishnabai, or "People of the Deep Water." Her father was a respected guide on Lake Temagami as well as a carpenter, and her mother, born on the nearby Bear Island Reservation, was a housewife. All five Laronde children and their parents loved music. Her father played various string instruments and her mother sang in the church choir. Laronde feels blessed that she grew up surrounded by the immensity of the land, and nature and ecology are at the heart of any work she does.

After high school. Laronde refused to become a secretary or teacher, two of the only careers options typically open to women in the north. She attended the University of Toronto, where she received her Bachelor of Arts (Honour). In her third year, she went on an exchange to Granada, Spain, where she learned Spanish and bonded with the Gypsies, or the Roma, another marginalized group.

"My senses opened up in Spain," she says. "I felt the energy of a people and their traditions. I saw flamenco for the first time and I wept." After university, Laronde went to Ghana for three months as part of an international development programme to study the viability of non-traditional roles of women. Living in Spain and Ghana transformed Laronde; she realized that the arts would become her life.

Her first foray into the arts was acting in theatre and film, but this was not enough to satisfy her artistic urges. With $15,000 seed money from the Toronto Arts Council, she founded Native Women in the Arts in 1993, and has subsequently helped hundreds of women find their own artistic expression. The works of Red Sky are physical-based, like Laronde herself – a former athlete-cum-martial arts expert who also engages in yoga and Pilates. She has also studied contemporary dance and butoh. "There’s a difference," she says, "between an actor who moves, which I am, and a dancer. It takes me longer to learn choreography, for example, but I can bring strength of dramatic expression to a piece. I’m most interested in giving dance a voice, and giving theatre a body." This aspect of Laronde’s performing skills was very evident in Dancing Americas. Dancing Americas (conceived by Laronde) used the metaphor of the migratory Monarch butterfly to capture the restless, subconscious, evolutionary drive that propels both the human and animal worlds, the ancient mysteries of the past and the ghosts of the present. Laronde held her own amid the trained dancers, riveting the eye with her charisma.

Red Sky’s first production was the wildly successful children’s show Caribou Song, based on a Tomson Highway story about two lost children and their magical encounter with a herd of caribou. She and Mexican dancer Carlos Rivera performed the choreographed text, which imbedded traditional dance into the movement to live music by Rick Sacks.

Laronde believes "the body preserves cultural memory like the rings of a tree or the strata of rocks", and is drawn to dance because the art form can go deeper than theatre, which can become trapped in words and the intellect. Because of its abstract quality, she equates dance with the pictographs of her native culture. Both are symbolic and represent greater ideas with images.

"Much of Western art is human-centred. Native culture and art is more spirit-centred," Laronde says. "People want to belong to something and that is what we should give them – stage works that are inclusive. An artist has a responsibility beyond doing work and earning money; art has to invade your lifestyle and become greater than yourself. It has to give something back to the community."