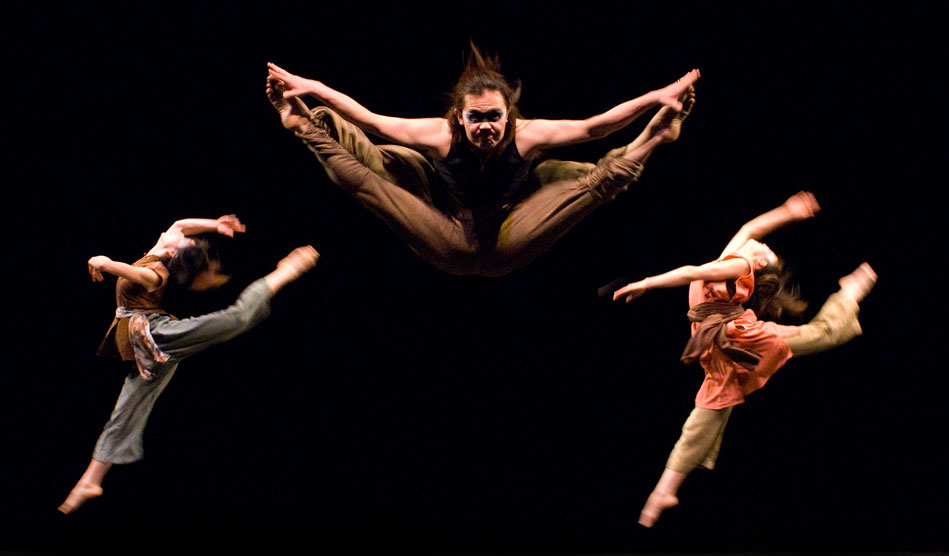 Red Sky Performance presented Tono on July 3-5, 2008 by The Banff Centre as part of the Summer Arts Festival. The multicultural choreography of Sandra Laronde and Roger Sinha was a bridge into the exotic world of Mongolia, China and our own indigenous communities. But such an intimate experience! We could hear the dancers’ breathing, our bodies vibrated with their percussive barefoot prancing on the bare stage.

One long song evoked the grasslands of the Prairie provinces, sweeping and majestic. All six long songs were horse tales with a Mongolian accent including a horse whisperer’s lullaby and tribute to horseman and shaman Genghis Khan.

Tono means the smoke-hole ring at the top of a ger, a nomadic Mongolian shelter, and symbolizes the gateway to the spirit world. Both Mongolians and First Nations people have a spiritual connection with horses. One segment of the performance depicts a Blackfoot creation tale where the horse is dreamed into being. The new creature exacts a promise from its creator of eternal mutual respect. In time, horses conjure up shamans who carry “horse medicine” and continue to protect them.

Peruvian-Canadian Jinny Jacinto assumes the upside-down position common among shamans who dream. Throughout, the dancers demanded concentration from their audience lest one miss a swift mood swing, an awesome movement or change of pace.

Even without a narrative thread, this production - the eighth of Red Sky since Laronde founded it in 2000 - vividly and viscerally illustrates Laronde’s discoveries of the meeting points among indigenous cultures.

Tono played at the Beijing 2008 Olympic Cultural Festival in September and will play in the 2008-2010 season in Toronto, Calgary, Edmonton, Ottawa and Vancouver.