Shimmer traces the radiance of the natural world, be it shining, precious or alive in darkness. Shimmer finds its inspiration in the fire and beauty of Canadian and Australian Indigenous traditional dance, and proves it is alive in the here and now. Shimmer explores the contemporary landscape where the red earth people meet the red sky, and shines new light on the sentient nature of our world.

In collaboration with artists from Indigenous Australia (mainland and the Torres Strait Islands), Red Sky brings a unique dance creation featuring an all-male Indigenous cast with live drummers and singers, as well as a didgeridoo player and songman.

Commissioned by the Canada Dance Festival, Shimmer premiered on June 6, 2006 at Ottawa’s prestigious National Arts Centre. Following the premiere, Shimmer was presented by DanceWorks at Toronto's enWave Theatre, EARTH: the World Urban Festival in Vancouver, and at The Banff Centre in Alberta. 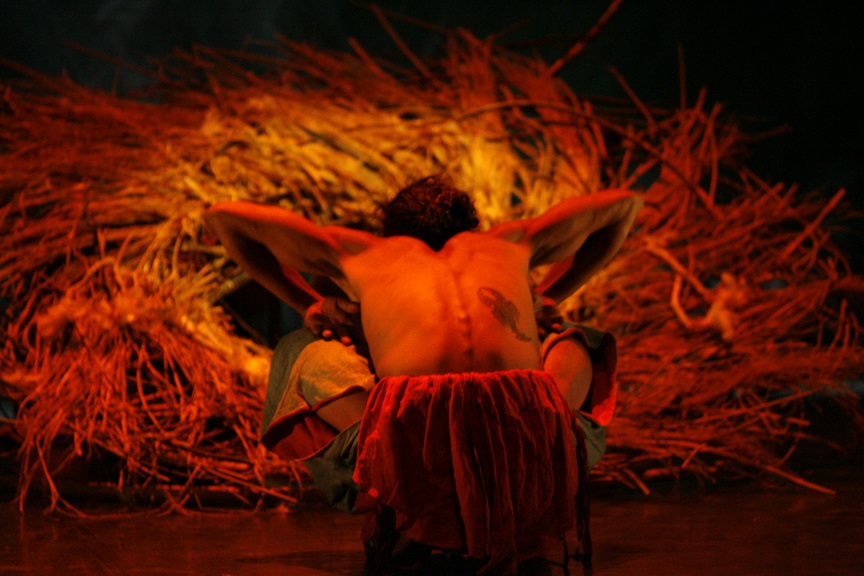 "...a penchant for surprising, suspending and inspiring."
– Contemporary Dance, Suite 101

"So many people have expressed how the performances of Shimmer were the highlight of the Festival for them. Thank you again for all of the positive energy this summer and the remarkable artistic experience."
– Casey Prescott, The Banff Centre

"Red Sky dance is a delight to the eye."
– Toronto Star

"A landmark cultural event between indigenous peoples, Shimmer celebrates the warrior's connection to nature and marks the first time an aboriginal work has been commissioned on the main stage by the biennial Canada Dance Festival since its founding in 1987."
– Ottawa Xpress

"I've thought of the term "warrior" more as a title to be earned, like "sensei" ("master") in karate, or the ranks above "private" in the military. But certainly I have never thought of a warrior as someone who displays "gentleness, grace and dignity and a natural radiance and that comes from their deep connection to the forces of the world". Absolutely fascinating. I'm very happy to hear of the success of Red Sky and its performances abroad, as well as the connections they've made to aboriginal persons of other nations. I share the sense of excitement that something like this is taking place. "
– Brad Thomas

"The dancers are extraordinary in their range, shimmering with an energy that appears to move through them as though they were conduits between earth and sky. Shimmer evokes a profound sense of connectedness."
– Karen Jaimeson, Choreographer